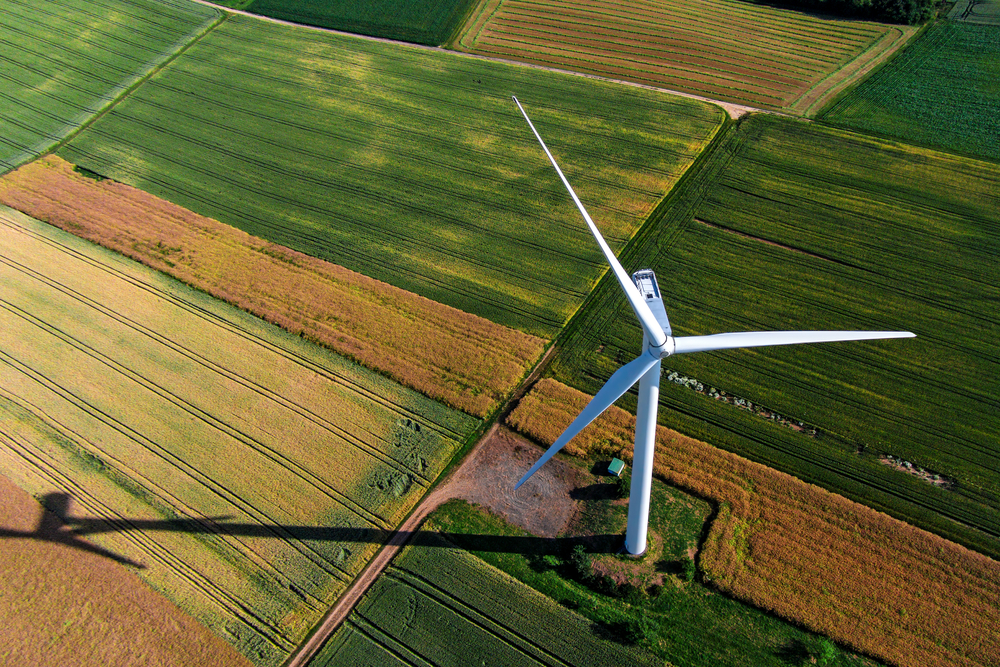 Thanks to decades of fossil-fuel use, climate change is now an extremely pertinent and concerning issue. Many individuals, companies and nations are now looking for ways to provide the same services with a smaller carbon footprint. As the world’s energy consumers – from individual households to large-scale industry – are increasingly moving away from fossil fuels, opportunities will exist for companies operating in the competitive, scalable and environmentally sustainable renewables industry.

Subsidies have played an important role in supporting renewables’ progress, but are no longer required in many countries where market parity has been achieved (market parity being the case where the unsubsidised cost to generate renewable energy equals, on average, the like-for-like cost of fossil-fuel generation). The chart below shows how the cost of US onshore wind power has fallen consistently over the last ten six-month periods. Similar trends are also exhibited for onshore wind in other countries, as well as in offshore wind and solar power.

Cost of US onshore wind

Clean energy encompasses solar, wind, hydro, tidal, geothermal and biomass power generation, while the main fossil fuels are coal, oil and natural gas. Penetration of renewables has been rising rapidly in recent years as associated technologies are becoming cheaper and more effective. The 2015 Paris Agreement also provided notable support for renewables through establishing the 2°C world framework and elevating the position of anthropogenic climate change in public discourse. Nevertheless, fossil fuels remain the backbone of most grids and play an important role in ensuring energy security.

At Newton, we focus most of our renewables research on wind and solar. Investment opportunities can be limited by the small size of some companies and consolidated supply chains. However, this is countered by renewables’ structural growth prospects, as the energy industry continues to decarbonise, and by likely ongoing regulatory support. Today, the renewables industry is worth $300 billion per annum (in sales), and investors can gain exposure directly through OEMs (original equipment manufacturers), developers, materials and infrastructure providers, and indirectly through specialist funds.

One interesting part of the wind supply chain are the OEMs, which make turbines, with the biggest companies tending to be concentrated in Europe and the US. Incidentally, China has the world’s largest installed base of wind, but this market remains somewhat self-contained, with sufficient opportunities persisting for domestic companies. However, Chinese OEMs will probably ramp up their international ambitions at some point in the future. Wind farms can be split into two categories: onshore and offshore. Originally, wind grew onshore as it was cheaper and more straightforward. As the prime onshore sites were developed, and offshore technologies caught up, offshore wind farms began construction.

The UK effectively reached onshore saturation relatively quickly, given its high population density and pushback from local communities. This aided development of the UK’s offshore industry, facilitated by the North Sea, which boasts strong and predictable wind levels, and relatively shallow waters, which minimise turbine foundation costs and complexity. Recently, floating turbines have been developed; this makes offshore more versatile, and may reduce the UK’s dependency on the North Sea’s shallow waters. The UK is a global leader in wind, which now powers around 15% of the country’s grid. The UK has committed to generating 30% of its power from wind by 2030, and floating offshore projects may go some way in helping to achieve this ambitious plan. These growth ambitions are likely to be harboured by other countries too, positioning wind OEMs well for years to come.

Although wind looks promising from both an investment and a clean-energy perspective, there are still challenges. Owing to local concerns and geographical factors, turbines tend to be located in remote locations, which can make maintenance costly and increase the infrastructure needed to get wind-generated power to consumers. However, solutions such as interconnectors allow the bi-directional, cross-border transfer of power, which adapts the grid to be more suited to renewables. For example, in February 2019, the UK opened a 1,000 MW interconnector with Belgium. In practice, this means excess wind power can be sold into the Belgian market when offshore wind supply exceeds demand.

How an interconnector works

Along with potential wind opportunities, we also believe that solar power has interesting prospects. There is a misconception that if wind wins, solar loses; in fact, solar and wind are complementary given that the former generates maximum power around midday and the latter at midnight. They also complement each other on an inter-seasonal basis, with solar peaking in summer and wind in winter.

Solar is predicted to grow considerably over the next ten to 15 years, and already comprises a significant proportion of clean-energy generation. This will be led by utility-scale photovoltaic (PV) energy, which refers to the transfer of energy in sunlight to electrical energy. Solar thermal is an alternative technology, which harnesses sunlight to heat or boil water. This is then used to heat buildings or produce electricity. Like wind, solar growth will be driven by cost competitiveness and development of storage technologies. Storage will be fundamental in supporting solar penetration growth (and that of other renewables), because it smooths the difference between peak and trough generation levels. In effect, this will make solar more like dependable, fossil fuel-generated power (known as ‘baseload’), which can be called upon to meet spikes in demand almost instantaneously.

Renewables’ progress is empirically illustrated by the winning prices at auctions for renewables installations, at which developers compete to deliver wind and solar farms at the lowest possible cost. Winning prices for renewables have trended downwards and are now consistently lower than those of their fossil-fuel counterparts. A key risk to solar is oversupply from Chinese manufacturers, which has put downward pressure on prices, and put many solar companies out of business. This emphasises the importance of good stock selection in this sector.

In summary, renewables have made great strides over the last decade, but are still restrained by their intermittency and continued investment in fossil fuels. Wind and solar have emerged as the two dominant technologies, and are likely to further consolidate their position given supportive regulation and their cost competitiveness. Development of storage technologies may accelerate renewables’ gain in market share from incumbent fossil fuels, but this will be tempered if it is felt energy security is compromised. While the structural prospects for the industry are undoubted, as investors it will be critical to be selective and account for intense competition and the intricacies of companies’ geographical exposure.

One year on: diversity voting and engagement

Nutrition and health: what are the investment implications?

Why we believe nutrition and health should be key considerations for investors.

Why equity-income investing is back.

Why equity income, why now?