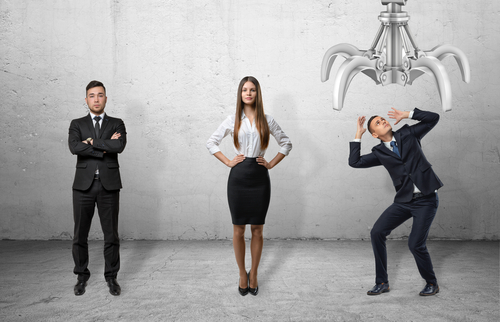 To date, technology has generally been seen as good for productivity and prosperity, but in the next decade people could become much more aware of the downsides of the technological revolution, as well as the many opportunities it offers.

The rise of the job snatchers
Investors often only consider the negative impact of technology when major security breaches hit the headlines. However, the next stage of digital development, the transformative adoption of artificial intelligence (AI), could prove even more disruptive than hacking and cybercrime.

This disruption is likely to be heavily felt in the workplace. Machines have been putting blue-collar employees out of work for more than a century; white-collar workers who historically thought they were immune to displacement by automation are now in the firing line.

The World Economic Forum (WEF) predicts that the rise of robots and artificial intelligence, part of what it calls the ‘Fourth Industrial Revolution,’ is likely to result in major disruption to the labour market, with an overall net loss of 5.1 million jobs over the next five years.[1]

Overall, the WEF forecasts a total loss of 7.1 million jobs, two thirds of which will come from white-collar roles. However, this will be met with a gain of 2 million jobs in computing, mathematics, architecture and engineering-related fields. 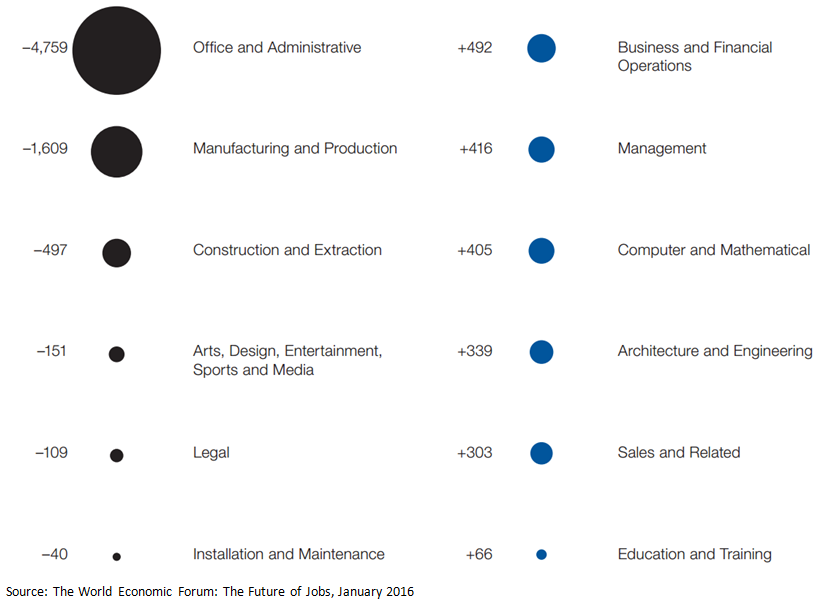 The WEF’s stark assessment highlights the looming challenge to businesses, and by extension their investors, as technologies displace jobs in industries, from manufacturing to health care. The organisation’s ‘Future of Jobs’ report concludes that many businesses are not adequately prepared for the disruptive changes ahead and have been ‘timid’ about taking action to address these challenges so far.

This failure to take action when technological change occurs is not unusual, although some businesses are quicker to adapt than others; as such, selectivity is key in a fast-changing world. We believe the best investment opportunities are found among those businesses that see how technology is changing, understand it better than their competitors, and adapt more quickly to harness the power of those changes.

We live in a world with more stuff that is more readily available, more cheaply, than ever before. That implies pressures on prices, margins and profitability. New technology, combined with super-cheap capital, as central bankers implement zero or even negative interest rates, means lots of overcapacity.

This abundance leads to bigger gaps, and that means a loss of pricing power for some companies. This is a particular risk for those companies which produce things which are easily commoditised, like commodity and energy producers. Those companies which are inefficient or are operating with old technology are also vulnerable to being left behind in this environment of rapidly changing business models.

By contrast, service businesses are potential winners in this world of abundance if they are able to exploit facets of their service. As commodities get cheaper, services and experiences are getting more expensive.

Coffee shops provide the best example of the difference between commodities and services. I visit a coffee shop on my way to work because it is convenient and I would only break that routine if coffee elsewhere was not only better but quite a lot cheaper. As that doesn’t tend to be the case, coffee shop owners have been able to increase prices year after year without much protest from their customers. Coffee prices, however, have been declining because coffee producers lack pricing power. Coffee producers are more easily replaceable; if you do not match the prices of other coffee providers, you may lose out.

Guides and search engines that help individuals and businesses navigate the vast amounts of information that are now available online should also do well in the world of abundance. The more information there is, the harder it gets to turn it into knowledge. Enablers, which allow other companies to manage, adapt and thrive in the new world, are also likely to benefit.

We should not assume that it is only technology companies that are adapting successfully to the new world. For example, a consumer credit reporting agency that has its origins in an 1898 Tennessee grocery store, is anything but a brazen Silicon Valley start-up disrupter, yet every aspect of the business has been undergoing transformation at the hands of advancing technology. For many years it survived and thrived as a credit bureau, providing reports and scores on individuals applying for credit.

Then, a new management team came in, took a fresh look at its business model, and began to rethink it as a data business. They looked at new forms of collecting and splicing and dicing data, realising that advances in technology meant they could collect more data about more people more quickly than ever before and provide more powerful and predictive tools.

You do not need to be investing in the latest technology company to benefit from technological change.