Sisters are doing it for themselves – and the economy 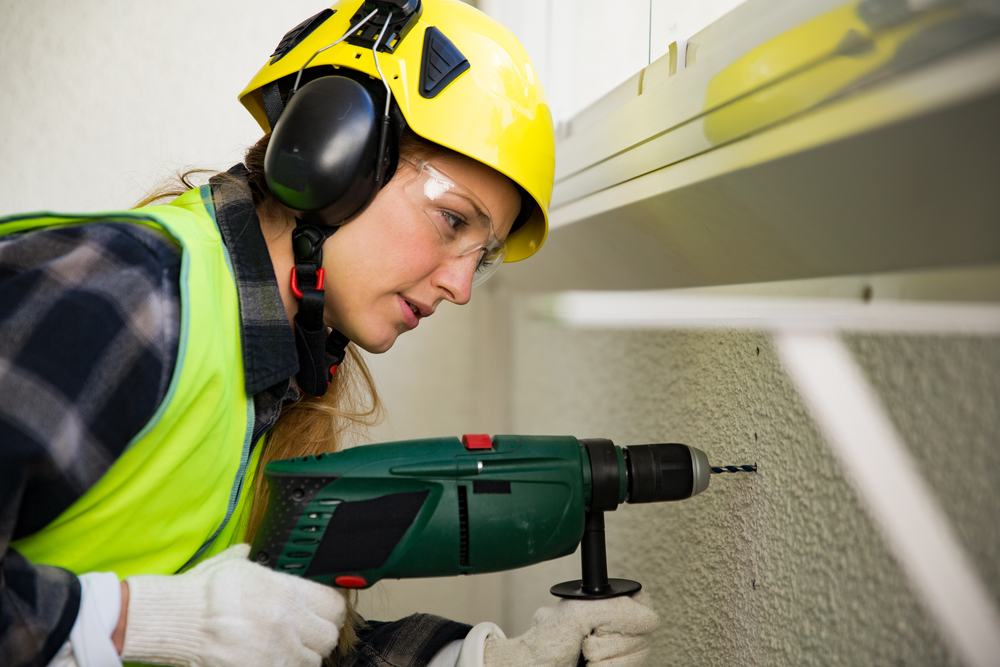 Gender equality has been a frequent media story over the last year, with the #MeToo and #TimesUp campaigns garnering global support and attention, and recent UK pay-gap figures revealing that stark pay inequalities still exist in most industries and companies. It also remains true that, despite similar levels of men and women leaving university and entering the workforce[1], at the executive level women seem to disappear.

Conversations are happening everywhere about the importance of improving diversity and inclusion, but most of these conversations centre on the possible social impact of supporting gender equality in the workplace.

Research shows that along with having a positive social impact, increasing the numbers of women in the workplace (and supporting them once they’re there) carries a host of potential macroeconomic benefits. We believe this highlights that working to achieve gender parity should be on the agenda of all investors, not just those with a social impact focus.

What is the gender gap?

Research by a number of organisations including McKinsey and the World Economic Forum shows that current educational attainment is essentially very equal globally. For example, Saudi Arabia, where women have only recently been allowed to drive and enter sports stadiums, actually has a marginally higher proportion of women than men enrolling in primary education than Iceland – a famously progressive country in gender-parity terms.[2]

However, despite accounting for 50% of the global working-age population, women only generate 37% of global GDP,[3] suggesting that they are a seriously under-utilised economic resource given their comparable levels of education. Much of this discrepancy can be explained by two key factors. First, there is a lack of women in leadership positions, both professional and political, and, secondly, women undertake the vast majority of unpaid care work. As you can see from the chart below, the majority of countries still fall into the ‘extremely high’ level of inequality category on these two measures. Given the traditional care-giving role of women in society, this is hardly surprising.

One theory by Harvard economist Claudia Goldin, which has proven controversial among some, is that the gender pay gap isn’t driven by discrimination in the workplace, but by female demand for ‘temporal flexibility’ – or, in less academic language, women simply require work that has flexible working arrangements and generous parental leave policies in place as they are the primary carers to children and other dependants.

As a result, not only are women more likely to drop out of the workforce early to meet caring commitments, but they also tend to work in less productive sectors and in less senior roles in order to accommodate their needs for flexibility; therefore they simply earn less. The chart below shows just how quickly women drop out of the workplace from associate to partner level. 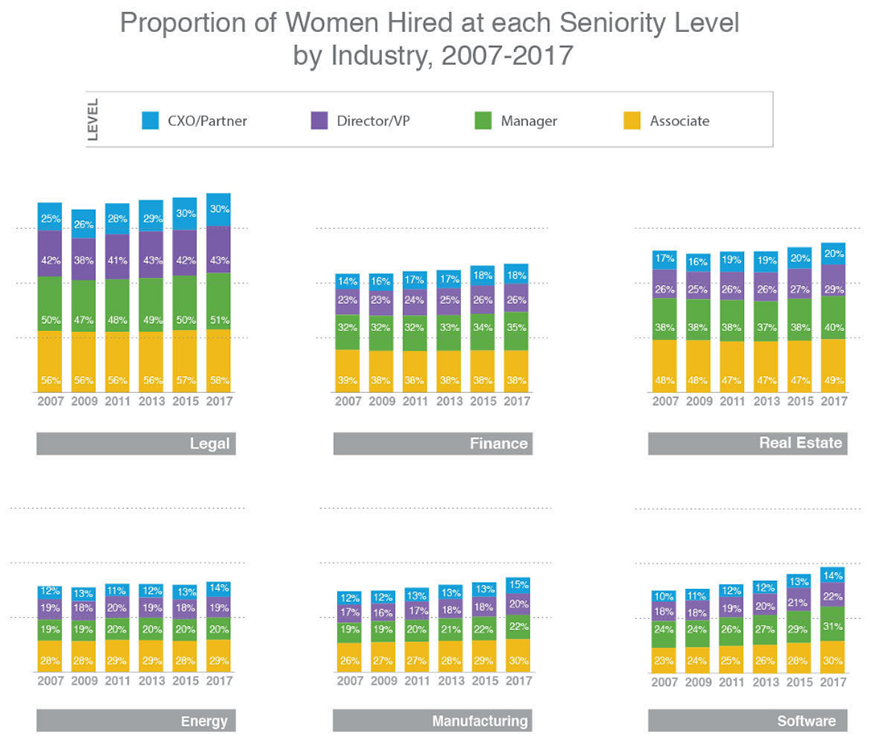 There are three primary benefits of increasing equality in female participation in the workforce – not just in terms of the numbers of women in work, but also in terms of improving equality in senior positions and across sectors.

Further, the study also considered the potential for slowing down workforce shrinking in those developed countries which are suffering from ageing populations – for example, increasing women in the workforce in Japan is expected to slow the reduction of Japan’s workforce from 65m in 2014 to 63m in 2025.

While there are nuances this study may not take fully into account, for example the displacement of men as more women enter the workforce (although historic data proves this effect is actually marginal), the research suggests there is still huge potential in harnessing the female labour force. 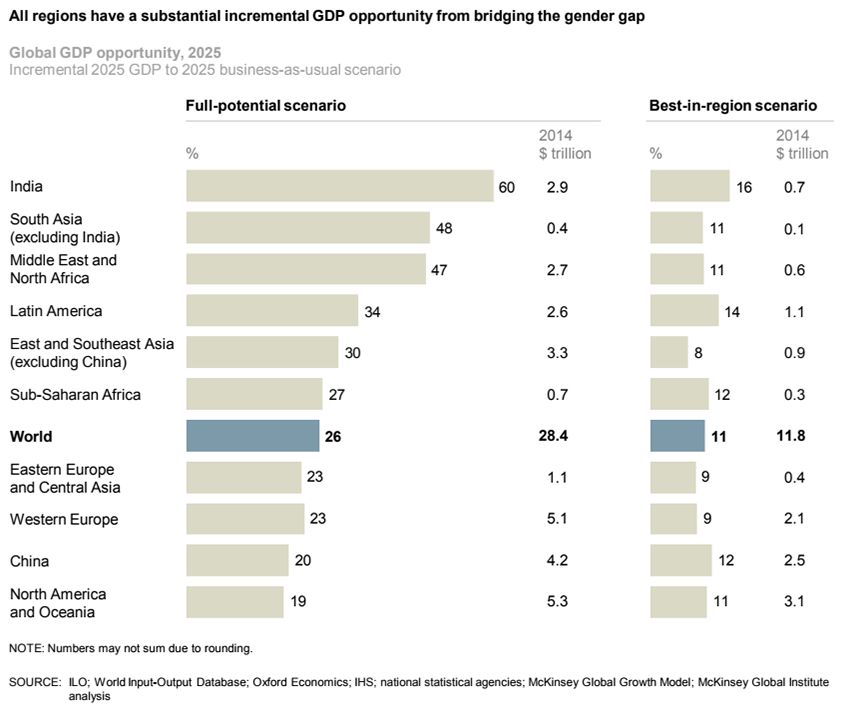 Furthermore, there are 96 million skilled women worldwide aged 30-54 on career breaks, with 55m having middle-manager experience or above. If such women had manager-level employment – assuming other employees are not displaced – they could generate £151bn per year of economic activity.

There are a variety of reasons for this gap; women (as well as men) are put off by the stereotypes associated with the sector, and there is a general lack of awareness of the opportunities available in the sector – a failing of the education system.

Luckily, there’s an obvious solution for companies – those who do the most work to combat those stereotypes and who work to improve the pipeline of graduates available to them will have access to the widest possible talent pool, and therefore will attract the best talent.

What are the implications for investors?

As we’ve shown, getting more women to participate in the economy has huge economic potential, and therefore, importantly for us, huge investment potential. Further, we see diversity as one of the most tangible factors by which we can judge the wider corporate culture of a company, and, given the correlation cited above, we believe this can be an important criteria to measure for all our investments.

In addition, further evidence of correlation between improving executive gender diversity and company profitability[5] encourages us to measure and engage with companies on a number of obvious and demonstrable factors, including:

– Flexible working practices
– Parental leave policies
– Improving female leadership pipeline
– Attracting/retaining women in STEM (science, technology, engineering and mathematics) sectors, improving the pipeline
– Whether the company measure its performance on diversity measures, and, if not, why not?
– Public disclosure of all of the above

Ultimately, we think the research above shows that incorporating the analysis of company’s diversity and inclusion policies into our investment process has clear benefits not only for our clients, but also for wider society.