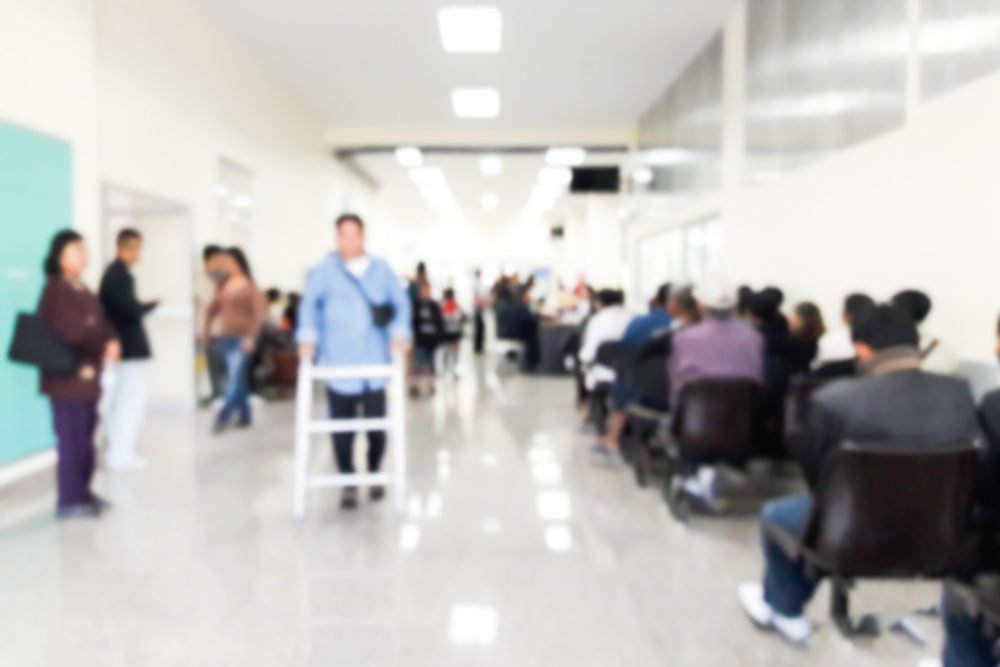 In the latest economics, geopolitics and demographics themes group, we discussed the fiscal costs of ageing and how prepared various countries are to bear this burden.

While the world’s population is expected to increase from 7.5 billion today to 9.5 billion by 2050, the age composition is set to change as populations age rapidly, driven by a reduction in fertility rates and an increase in life expectancy.

The stats are stark. By 2050, it is estimated that 15% of the globe will be over 65, up from 8% in 2015. One key metric, the old-age dependency ratio (the share of over 65s as a percentage of the working-age population), is set to rise in most countries over the next 20 years (see chart below), with China and Western Europe expected to see the most marked increases.

Projected change in old-age dependency ration from 2015 to 2035 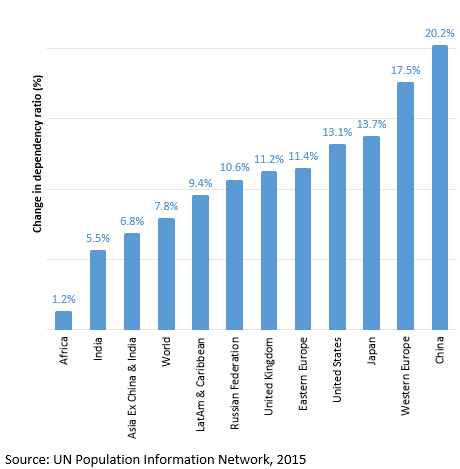 The fiscal costs of ageing

With ageing populations comes rapidly increasing numbers of retirees. The level of preparedness for this differs considerably between countries, but as a whole, governments, employers and individuals have not been putting enough aside to meet their future commitments. We can see this divergence between countries in their different expected net pension replacement rates (the proportion of after-tax pension received in retirement relative to after-tax earnings when working). 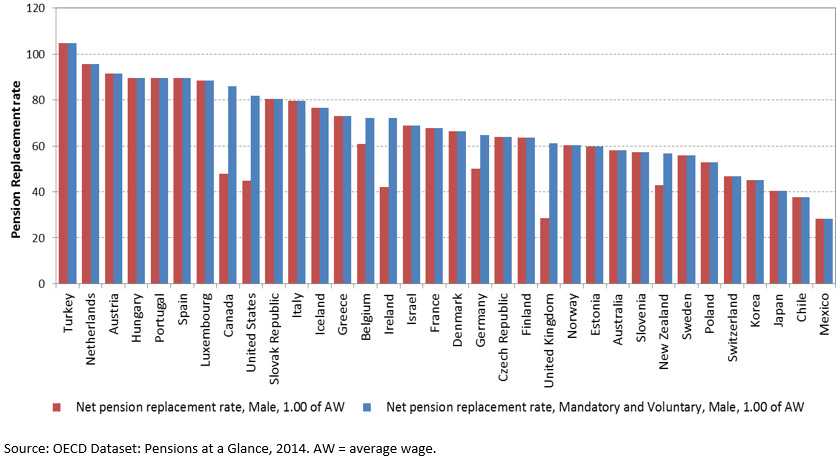 With the state still dominating as a source of retirement income in many countries, governments are likely to come under increasing strain in future as these costs rise ahead of projected revenues.

The impending fiscal burden on states is considerable, and it’s not just pensions. Health care and long-term care for the aged are two other areas where government spending is forecast to increase substantially. Europe is particularly exposed to the consequences of changing demographics as countries typically run expensive ‘pay as you go’ state pensions. This means that pensions paid to today’s retirees are financed from contributions paid by current workers. So as pension costs increase, to remain in balance, the state has to take more from current workers or pay less to pensioners.

According to forecasts by the OECD, Germany, Ireland, Belgium, Luxembourg, the Netherlands and Slovenia all are forecast to see pension, health-care and long-term care costs rise by more than 4.5% of GDP per annum by 2050. In Austria, the Slovak Republic and Portugal costs are expected to increase by between 3% and 4% of GDP per annum.

Estimated change in government pension expenditure from 2015 to 2050 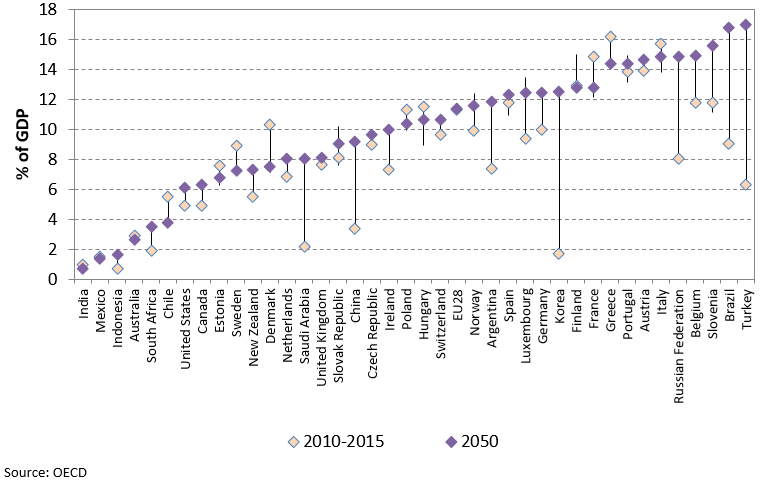 The few emerging economies for which data is available show some of the largest pension and health-care cost increases: by 2050, China and Russia are expected to see fiscal costs related to the above rise by over 8% of GDP, while Brazil, Turkey and South Korea are set to see theirs rise by well over 10% of GDP.[1]

In the case of the US, the US Congressional Budgetary Office forecasts that social security and major health-care programme spending is forecast to increase considerably – by 4% of GDP per annum or, as a percentage of government revenue, from 58% today to 76% by 2035 and 80% by 2047 – a clearly unsustainable trajectory.[2]

What can governments do?

There are a few ways for governments to improve the outlook for future post-retirement incomes and reduce the pressure on the state pension system. The easiest option politically is to increase retirement ages as a number of European countries have done. This has frequently been combined with equalising/narrowing the difference between the male and female retirement age, with the female retirement age rising more sharply as a result. This means people pay in for longer but also take less out of the system, which has made a meaningful improvement to the outlook for public pensions expenditure according to the most recent forecasts by the OECD. The increase in the retirement age pushes a disproportionate amount of the costs of retired/soon-to-retire workers onto younger workers. Nevertheless, this is more palatable than cutting pension payouts.

Another option is to encourage or mandate enrolment into private pension schemes to shore up private pension assets, which then reduces retirees’ reliance on state pensions in the decades to come. The UK government has been phasing this in from 2012 with its auto-enrolment initiative, with it now being compulsory for employers to automatically enrol their eligible workers into a qualifying workplace pension scheme and contribute to the plan, unless employees explicitly opt out. Minimum contribution rates began at 2%, but will increase to 5% by April 2018 and will rise to 8% by April 2019 (5% contribution by companies and 3% by employees).

Despite undertaking some of these measures already, government pension expenditure is still set to rise in many countries.

As pressure mounts on governments to support the growing elderly population, it’s clear further reform will be necessary to keep pension systems and health-care programmes affordable.

New significant sources of revenue will be needed to fund the increasing number of retirees – this could come from a reduction in corporate profits via increased company contributions and/or a rise in taxes. It’s also likely in some cases that retirement benefits and other government services will need to be trimmed to make them more affordable, hopefully alongside increased private pension savings helping to support post-retirement incomes.

With governments facing huge pressure on their budgets, another consideration is the potential for a fall in discretionary spending if there is a reduction in state support for pensioners or a cut in public health services. After all, we’re not forecasting a wealthier population, just an older one.

For eurozone countries, the option for individual governments to depreciate their currency or print money to solve the debt problem is not available. Therefore, with the current institutional setup, it is possible some time in the future that a eurozone country facing a debt crisis (worsened by rising age-related expenditure), and which is unwilling to embrace the necessary reforms placed on it by the rest of the euro group in return for a bailout, may instead choose to leave the single currency.

Why we believe a further reduction in the DC charge cap would be detrimental to members’ outcomes.

With further reforms to implement, and markets trending higher, what is next for the DC pensions sector?

What can UK DC schemes learn from the US about managing litigation risk?

The lack of innovation in the post-retirement market remains disappointing...