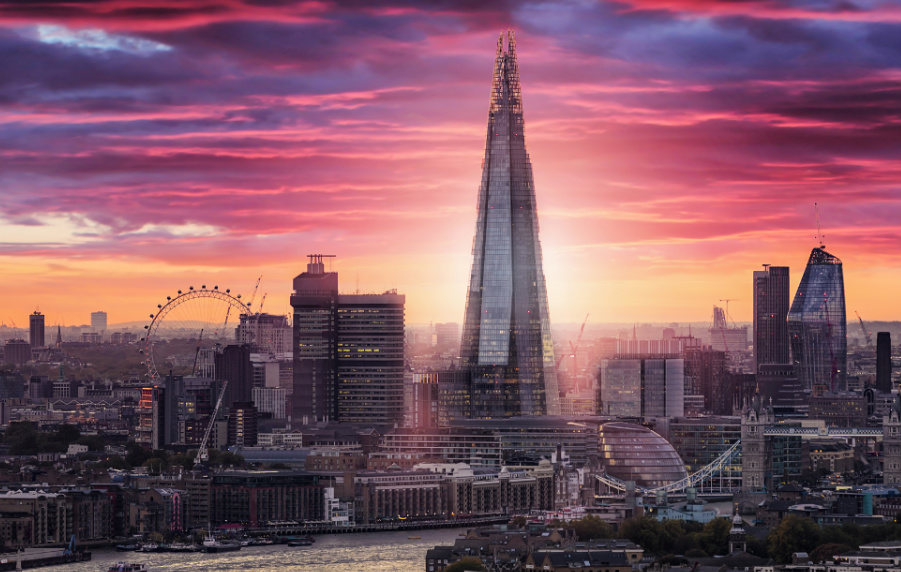 As we move into 2018, one would be forgiven for believing London’s air quality had turned a corner following Mayor of London Sadiq Khan’s claim that air pollution in the British capital during January was at its lowest for 18 years.[1] While this claim is technically true, in reality it is perhaps misleading. In this blog we will dig beneath the surface to explore the problem, look at how policy aims to combat poor air quality, and consider the investment opportunities.

London has long suffered poor air quality, with the city notorious for its incapacitating smog during the mid-20th century. More recently, the proliferation of vehicles with internal-combustion engines has ensured that the city’s air quality has remained low. As London has continued to grow, so has the concentration of polluting traffic and industry. Idiosyncratic factors such as Heathrow Airport’s upwind location and the ‘street canyon’ effect have worsened London’s air quality. The street canyon effect is most pronounced when streets are flanked on either side by tall buildings, carry large volumes of traffic (particularly diesel-powered), and when the mean wind blows perpendicular to the direction of the street. Oxford Street is a good example of this, and is often referenced by articles emphasising London’s poor air quality.[2] The combination of these factors with particular weather events (high pressure and low winds) can result in dangerous and newsworthy bouts of air-pollution episodes. 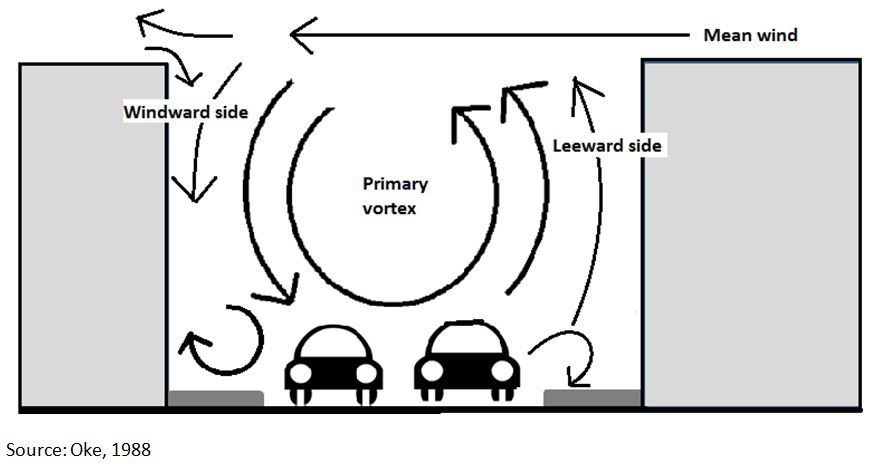 What is air pollution?

Air pollution primarily refers to unsafe levels of nitrogen dioxide (NO2), particulate matter (defined as coarser PM10 and finer PM2.5), and ozone (O3) in the air. Research shows that polluted air is damaging to both human health and the environment. In 2013 an estimated 71,000 premature deaths were caused by exposure to NO2.[3] Traffic is the main source of NO2, whereas PM originates from both natural (sea salt, dust) and man-made sources (brake dust). PM2.5 is the most harmful to human health, given the minute size of particles, which can bypass the nose and throat and penetrate into the lungs and circulatory system.[4]

How is air quality regulated?

Air quality is regulated using the European Union’s (EU) twin-track approach, as well as unilateral action by the Greater London Authority (GLA). EU legislation regulates both ambient (i.e. the air we breathe on a daily basis) and vehicle pollution concentration. For example, the Euro 6 vehicle-emissions legislation, introduced in 2014, stipulates emissions limits for pollutants including PM and NO2.

EU air quality legislation is likely to be assumed into UK law when Brexit takes place. It is highly unlikely that legislation will be rolled back. In fact, this may be a good opportunity to improve legislation by making the UK government directly accountable for air-quality breaches, for example.

Euro 6 is the most progressive form of vehicle-emissions legislation, but it still permits diesels to emit considerably more pollution than cleaner petrol engines, and this is under ‘test conditions’ (i.e. in a laboratory). In ‘real-world’ conditions, there is considerable variation in the cleanliness of Euro 6-rated diesel vehicles, so much so that some Euro 6-rated diesel vehicles are six to seven times dirtier than the cleanest diesels approved under the previous Euro 5 standards (for vehicles introduced from 2009-2014).[5]

The recent emissions scandal involving multinational vehicle manufacturers was one of the most high-profile failures of air quality regulation. This involved the use of ‘defeat devices’ which were designed to sense when a vehicle’s emissions were being tested, and subsequently modify the performance of the engine to reduce emissions. Not only did this episode highlight the unethical behaviour of vehicle manufacturers, but it also underlined the outdated laboratory-based EU emissions testing. The European Commission is exploring how to make emissions testing more representative of on-road conditions. It remains to be seen whether this improved alignment will in fact improve public health. 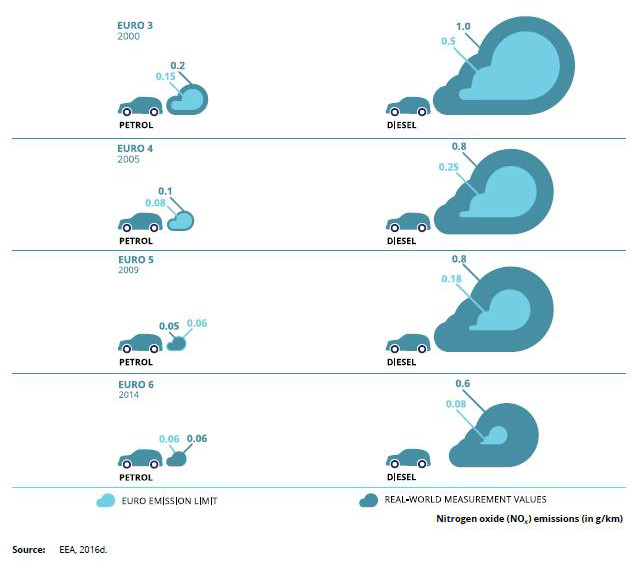 Ambient pollution levels are regulated by EU law, which stipulates that NO2 should not exceed a threshold concentration, measured over a one-hour averaging period, for more than 18 hours in total per year. It is this measurement that Sadiq Khan referred to when claiming London’s air in January was the cleanest for the last 18 years. For the last 10 years, London has broken the limit within the first six days of the calendar year. However, 2018 was different and it took nearly the whole of January for this measure to be breached. In reality, this was probably a result of the windy start to the year, rather than the unexpected effectiveness of air-pollution policy. While Sadiq Khan was not technically incorrect, this highlights the complexity of the air pollution problem given the broad array of variables involved.

In addition to EU policy, the GLA introduced the London Low Emission Zone (LEZ) in 2008. The LEZ covers Greater London and charges a flat fee for vehicles that fail to meet a combination of the Euro 3 and Euro 4 emission standards. The LEZ was considered a proactive signal of intent, even if its effect on air quality was moderate (given the relatively lenient Euro emissions standards chosen). The introduction of the T-Charge (toxicity charge) in October 2017 – a flat £10 fee on top of the Congestion Charge – deepens the regulatory foundations laid down by the LEZ.

In 2019, Sadiq Khan is expected to introduce an Ultra LEZ (ULEZ), which will charge all diesel vehicles failing to comply with Euro 6 emission standards. While this proposal is admirable, the aforementioned real-world performance of Euro 6 vehicles by no means guarantees success of the ULEZ. Cynics will also argue that the ULEZ aims to backtrack on misguided environmental policy from the early 2000s when people were incentivised to buy diesels because they were thought to be less polluting. 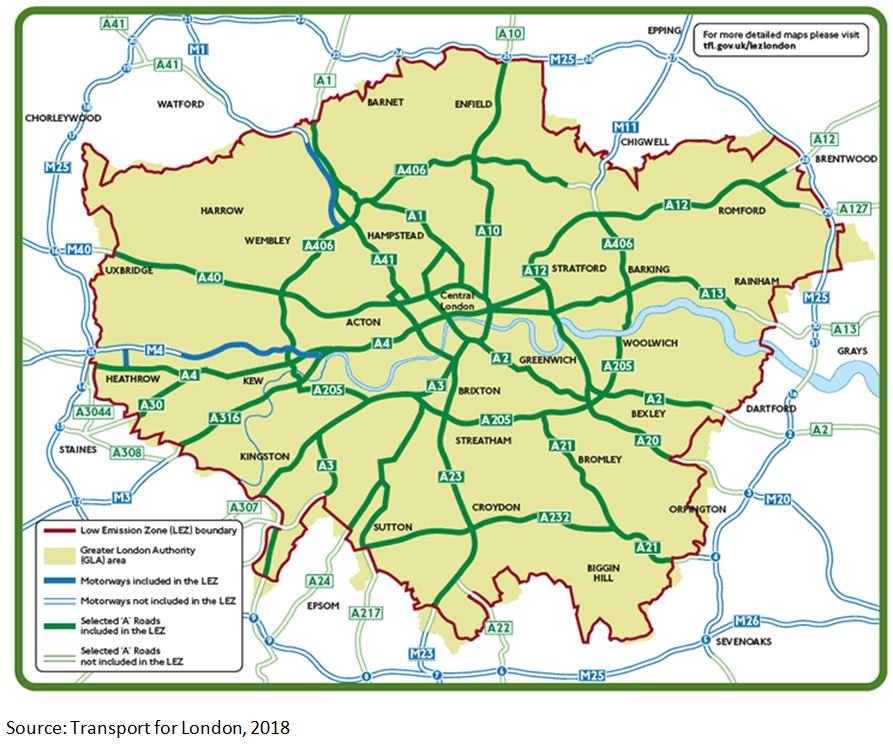 The beneficiaries of this growing legislation are numerous. While not immediately obvious, property-management companies which commit to improving energy efficiency should profit from lower running costs and higher portfolio yields. This may ultimately be beneficial for real-estate investment trust (REIT) investments.

Tax breaks for electric vehicles (EVs) and public support for on-street EV charging is supporting evidence for investment in battery manufacturers. Vehicle manufacturers are increasingly incentivised or mandated to produce cleaner engines, and this has incidentally acted as a stimulus for innovation. One example of this is AdBlue, a biodegradable solution added to a separate tank in diesel vehicles, which enables the function of a selective catalytic reduction that breaks down harmful NO2 emissions.

Finally, the development of waste-processing facilities near to where waste is created can minimise emissions from heavily polluting waste transport, and is supportive for infrastructure funds and companies.

In summary, air pollution is related to a wide array of investment opportunities and is likely be a supporting factor in any investment thesis for companies in the sectors mentioned above.

This blog hopefully illustrates how urban air pollution is a complex and dynamic problem driven by both natural and man-made factors. A combination of unilateral and bilateral regulation is attempting to remedy it, with support from public and private investment. Air pollution (in most cases) is an intangible and binary issue, and is inherently related to the public good that is fresh air. Regulation has broadly been admirable in its intention, if leaving room for improvement in its effectiveness. Despite this, a framework has been established for bottom-up behavioural adaptation, which can be navigated by the wide array of stakeholders in the air-pollution arena.

Future improvement of London’s air quality appears likely. The timeframe over which this can be achieved depends on how strict regulation is, as well as on the extent of behavioural change and investment. Investing in technological development to address air pollution is inherently risky, but should also offer us a number of investment opportunities.

Year of the Dog