Does Blockchain represent the future of financial transactions? This question is being asked more and more frequently by global financial and business leaders who are exploring what many believe to be a revolutionary new approach to doing business.

Blockchain first came to prominence as the platform for Bitcoin, the peer-to-peer electronic ‘cryptocurrency’. The technology allows consumers and buyers to form online networks, and to transact directly without any requirement for intermediaries. Users can create permanent records of their transactions in what are, theoretically, secure chains of computer code. Importantly, assets cannot be replicated or sent to multiple recipients within the system.

Using a publicly available ledger system, Blockchain also offers a high degree of transparency, and the costs of the system are shared among those using it.

Banks and other financial institutions are currently looking at ways in which the technology can help their businesses. Potential has so far emerged in areas such as payments, clearing and settlement, syndicated loans and trade finance. Joint analysis by global management consultant Accenture and operations benchmarking specialist McLagan suggests that Blockchain technology could reduce investment banks’ infrastructure costs by up to 30% – a potential saving of over US$8 billion.[1]

While there may be significant long-term investment potential in the various organisations and companies supporting Blockchain, the application of the technology within the asset management is, at this stage, limited. However, it seems likely to play an increasingly important role in some administrative activities.

One area where Blockchain is particularly useful is asset servicing; in relation to custody, there are enormous numbers of transactions taking place, and Blockchain technology can be applied relatively easily in this field. In the banking system, there might be other broader opportunities to harness the benefits of the technology.

Just as online retailing brought a new level of pricing transparency, and empowered many consumers, so innovations surrounding Blockchain have the potential to transform many types of financial transactions.

However, for all Blockchain’s potential advantages, question marks remain, not least in relation to who actually owns the technology which underpins the system, how it is policed, and how many of its components and innovations could be potentially patented, and by whom.

While the last two years have seen a surge in companies seeking to patent Blockchain-related technologies, some analysts point out that, in the final analysis, Blockchain networks are governed by everyone who uses them, but by no one in particular.[2] Some fear this is storing up the potential for major legal battles over intellectual property ownership within the Blockchain universe.[3]

In a world in which computer hacking has become increasingly sophisticated, some commentators also wonder about the potential vulnerability of new electronic banking and accounting systems. In its infancy, Bitcoin was dogged by scare stories of hacking. There is even evidence that some international governments, including North Korea, have attempted ambitious Bitcoin hack attacks.[4]

Blockchain’s proponents argue that the system is inherently more secure than electro-currencies like Bitcoin because it has benefitted from decades of research into cryptography and other security measures, and has successfully resisted cyber attacks for over eight years.[5] Such is its perceived security that both NATO and the Pentagon have reportedly been moving to develop military-related apps which exploit Blockchain technology.[6]

While some major steps have been taken to develop security within newer electronic finance networks, I would sound a note of caution about future developments. Exciting as the dynamics around cryptocurrencies and facilities such as Blockchain are, we have to remain cognisant that, as technology grows more sophisticated, so do hackers. We are already seeing data issues around ‘cloud’ technology, and Bitcoin itself has proved vulnerable in the past.

Much depends on how far Blockchain develops its ability to mask the identity of the final user, and on how encryption technology develops. The more secure it becomes, the more attraction it will hold as a tool for both investors and end users. In turn, the often symbiotic relation between Blockchain and Bitcoin could, in time, bring greater stability to financial markets if acceptance and usage of the cryptocurrency were to grow exponentially.

Despite initial controversy, more and more major companies and payments systems are starting to accept Bitcoin as a valid currency. The key advantages of Bitcoin are its finite nature, and its immunity from manipulation by central banks. It is tethered to a finite resource, as the ability to ‘mine’ it is designed to resemble a precious metal such as gold. In this regard, it seeks to replicate the approach to currency typified by the gold standard.

Beyond the finance sector, other businesses are already exploring ways in which Blockchain could be applied across a range of areas, such as oil and gas trading and even land registry and property rights. It could also be used to process and record transactions related to intellectual rights, film rights, copyrights and music royalties.

It will be interesting to see whether Blockchain is eventually adapted as a global standard, or if it is seen as much more of a national facility adopted by individual markets. For more technologically advanced markets, it should hold significant appeal, but it is worth remembering that some of the smaller, less developed markets are still dominated by cash, and that some areas of Latin America and Asia are still largely subsistence-driven. 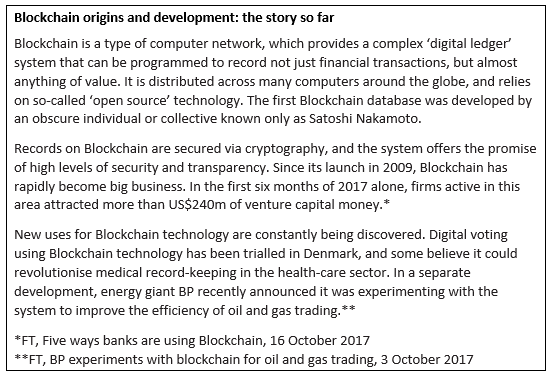 What lies ahead for fixed income?