We think that the environment since 2008 has been similar to previous post-crisis environments, especially those following the First World War and the Great Depression of the 1930s.

The diagram below attempts to put some structure around a post credit-crisis world. Initially, the burden falls on the central bankers, who become the ‘lords of finance’; they are in control, with elected governments forced to sit on the sidelines and focus on austerity. This time around, authorities have avoided a depression, but only by increasing debt levels.

Unfortunately, a prolonged period of weak growth and rising wealth inequality leads to the response on the left-hand side of the diagram: growing support for anti-establishment, anti-trade and populist political parties, and votes for change, such as the referendum on UK membership of the European Union. An anti-trade approach has been seen before in the US Tariff Act of 1930, otherwise known as the Smoot-Hawley Tariff, which was blamed for compounding the effects of the depression. 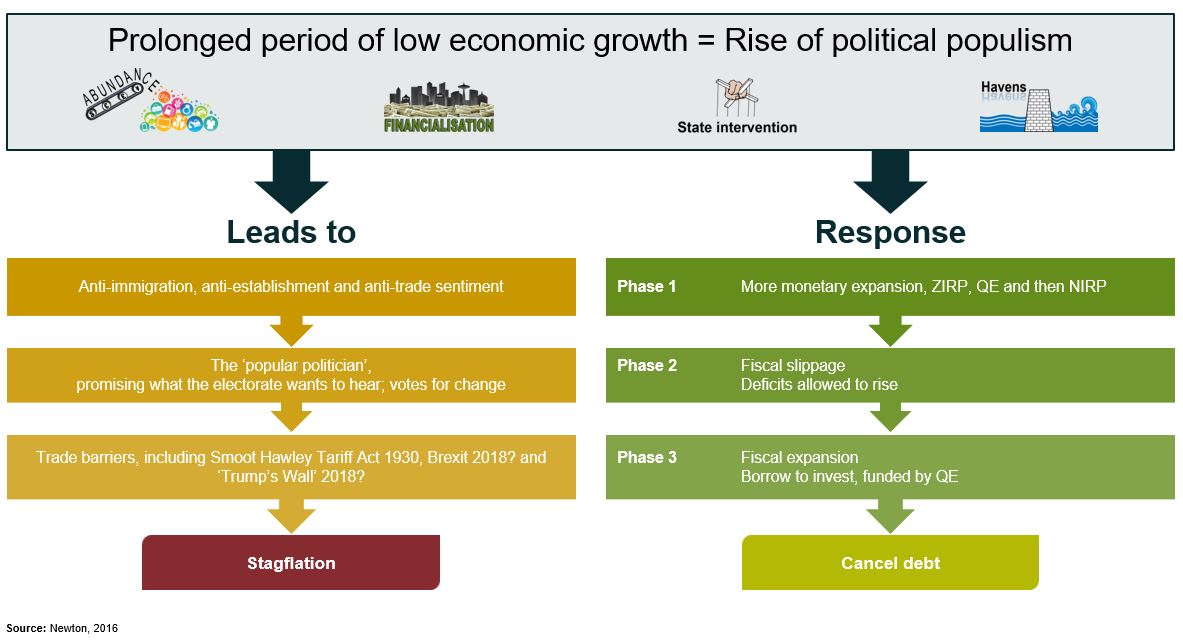 Typically, incumbent governments and their central bankers will respond along the lines of the path on the right-hand side of the diagram.

There comes a point when monetary stimulus is exhausted, and governments need to step in with fiscal stimulus. In the 1930s, this came in the form of the ‘New Deal’, and perhaps after one last attempt by central bankers to crush interest rates down to zero (or below), we may get something similar now. This involves governments borrowing money by issuing bonds, which are then bought with printed money from the central bank. If this money were then put to productive use, it could lead to further investment.

The Swiss can currently issue a 30-year bond with a negative yield, and put it to good use by building another long tunnel through the Alps. The UK government isn’t quite experiencing negative yields yet, but a new airport in the Thames, for example, could be funded with historically cheap long-term money.

Why might this be necessary? The Brexit vote has raised uncertainty and hit two vulnerable areas:

For now, given the uncertainty of the UK’s relationship with its largest trading partner and the lack of leadership in government, the Bank of England seems likely to remain the only defence, and we believe it will loosen monetary policy further by cutting rates close to zero and then restarting quantitative easing (QE – bond purchases). The decline in sterling is also helping, but, as with all one-off currency devaluations, it worsens the environment for trading partners.

Meanwhile, we think the US Federal Reserve has probably missed its chance to raise rates, especially as we expect the economy to be slowing in the second half of the year anyway.

In Europe, where we have seen more instances of negative rates and increasing use of QE, it’s hard to see what else the authorities can do, particularly when one factors in the need to placate an increasingly anti-establishment electorate. Talk of broadening QE buying to allow greater purchases of ‘periphery’ debt seems a logical first step, but ultimately policymakers need to address the banking system’s bad debt problems. Could the ECB be allowed to buy bank debt?

The central banks have a few more tricks up their sleeves, but so far they have failed to solve the problems they face, while arguably causing others (such as asset-price bubbles and the deflationary expansion of capacity in the economy). Increasing talk of fiscal expansion is likely, but we have to hope we don’t require an economic depression before it is implemented.

The opinions expressed in this document are those of Newton and should not be construed as investment advice. Any reference to a specific security, country or sector should not be construed as a recommendation to buy or sell this security, country or sector. Past or current yields are not indicative of future yields. The value of overseas securities will be influenced by fluctuations in exchange rates.