Age of the aged 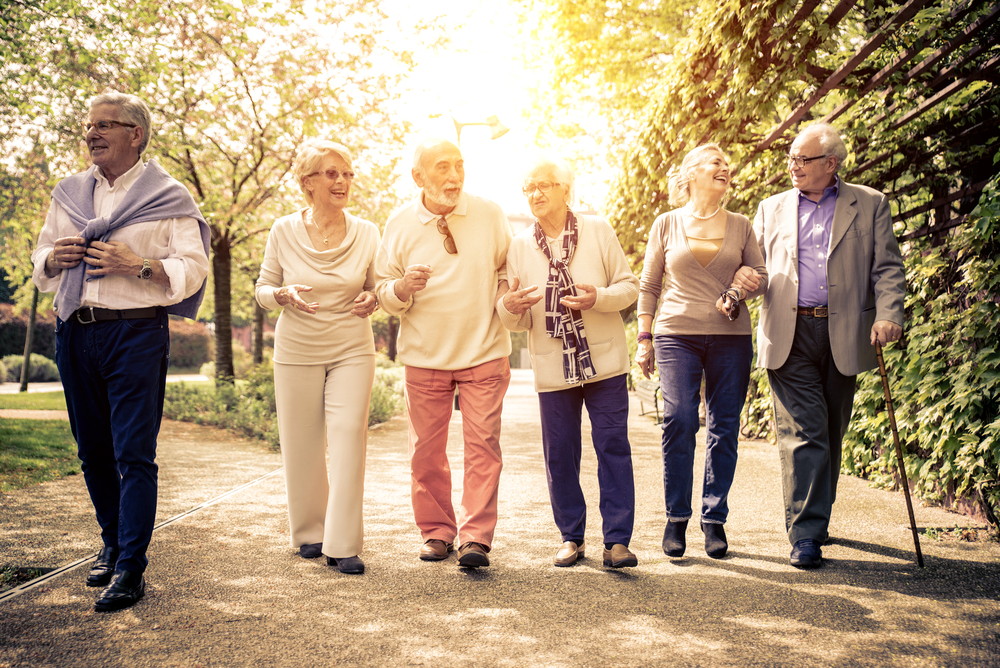 150 years ago, half the European population were dead by the age of 45. Now, 50% will make it into their 80s. In Japan, the number of over 65s is predicted to increase from 27.0% of the population in 2017 to 36.4% in 2050, with similar increases being seen in the US, the UK, India, Germany, Singapore and elsewhere. In addition to the ageing population, a rise in ‘dependency ratio’ is also being observed, with fewer working age people supporting each retiree as time goes on. This sharp increase in longevity is being seen in populations all over the globe, and has a marked impact on a number of sectors and industries, which in turn results in numerous investment opportunities.

One conclusion that many jump to is that an ageing population increases healthcare costs. However, new research suggests that increased longevity might actually lower healthcare costs (although the cost of social care is still predicted to increase) in many countries outside of the US. Excluding the US healthcare system, the elderly are more likely to be treated outside the hospital system and are unlikely to receive expensive, complicated treatments. Seshamani and Gray (2004) found that the increased spending at the end of life is attributable mostly to proximity to death, while Dixon et al (2004) found that the average number of bed days in hospital before death does not increase with age. This suggests that the consensus view of the impact of increasing longevity on healthcare costs may need to become more nuanced.

Adding to this is research suggesting that the number of ‘disabled years’ does not increase linearly with added life expectancy (i.e. with an extra ten years of life, individuals don’t spend all of those years in extremely poor health). In general, it is an increase in ‘disabled years’ that causes increased healthcare spending, rather than merely an ageing population. While we know smoking and alcohol consumption both increase disabled years, with a knock-on effect on healthcare costs, the effect of obesity on the increase in disabled years is becoming increasingly pronounced. Given that obesity has doubled in the US in the last 30 years, this may become increasingly relevant. 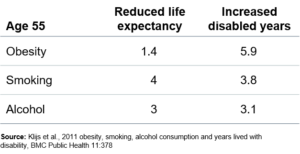 We can also expect both life expectancy and the quality of extra years to increase along with advancements in science and medicine. With further improvements in healthy living, disease prevention and regenerative medicine, we may see the impact of increased age on health decrease. From an investment perspective, there is a lot of focus on ‘ill-health’ measures, but as life expectancy increases many remain in good health for most or all of their extra time. 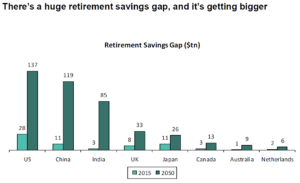 Source: June 2018 Bernstein report – Ageof the aged: The implications of an older population for the financial industry

Source: June 2018 Bernstein report – Demographics – Destiny for the market, doom-mongering or a path to a better benchmark?

This may present opportunities for pension providers and other companies tackling the issue of retirement savings and retirement planning. This extends to fintech (financial technology) firms, many of which are developing apps that make saving easier or more effective by following spending patterns or rounding up purchases and putting the extra pennies directly into a savings account.

From a consumer perspective, many current and soon-to-be retirees are clearly enjoying their leisure time, with over 65s having the fastest growing holiday expenditure and spending more on alcohol. The travel industry in particular is likely to benefit, with both package holiday and cruise operators seeing an increase in purchases from their older customers. 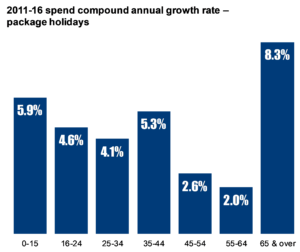 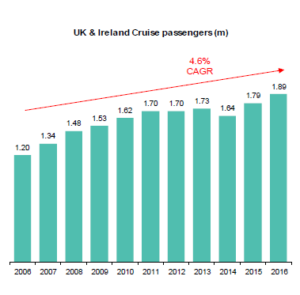 However, it is worth remembering that many of these retirees are retiring with the backing of significant household wealth and defined benefit pension schemes. While future generations are unlikely to retire in the same financial situation, we see this trend of many retirees having high disposable income continuing for at least 5-10 years.

Two more sectors that are likely to be significantly influenced by this demographic trend are the housing and care sectors. 90% of US seniors plan to stay in their homes (ageing in place) indefinitely – especially with the extremely high cost of living in a specific elderly care community – meaning that more homes will need to be built as the population expands. 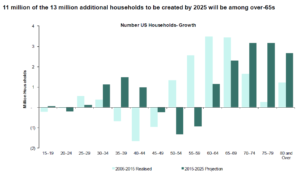 This has clear implications for construction firms, and companies related to creating homes for the elderly specifically. US homeowners aged 65 and over already account for 25% of all home improvement spending, with this figure expected to rise to 31% by 2025. Given the significant cost advantage to staying where they live, many over 65s upgrade their homes in order to make them more suited to their old age, by raising wall sockets to waist-height and installing rails in bathrooms for example. Some over-65s choose to move into care facilities, meaning care homes also represent a growing market.

Overall, our ageing populations are likely to have a pronounced impact across the economy. Despite there being some disagreement about the effects on healthcare spending, it is highly likely that a number of consumer sectors will feel the influence as extra healthy years leave more time for leisure pursuits like travelling, especially on cruises or package holidays. There will also be profound shifts in housing, social care and saving for retirement, which will present a host of investment opportunities and considerations. This is a hugely diverse and dynamic issue, but one that has investment potential in a multitude of different areas. As the years go on, the specific implications of each generation’s retirement will vary, but these major population trends are making waves across the world.

Turkey: the canary in the coal mine?

Gen Z is spending more on health, fitness, food and fashion. We assess the investment implications.

Genomics has the potential to change health-care systems on a global scale. How will this affect investors and…

Do defined contribution pension schemes need to do more to take account of modern-day investors’ requirements?